Someone has translated James Joyce’s Finnegans Wake – all of it – into Latin. In his own words:

Obviously it’s a kind of joke, and the joke depends both upon its pointlessness and its egregiousness. I might have just floated the idea, and maybe translated a few pages; but if a thing’s worth doing, it’s worth doing well, and that counts double if a thing was never worth doing in the first place. I feel Joyce would agree with me here.

While Adam Roberts is the author, Google Translate is a co-author. Roberts fed passages of Finnegans Wake into Google’s Latin machine, then tried to make a sensible (as sensible as the original anyway) translation out of what I imagine was the near-gibberish that came out. 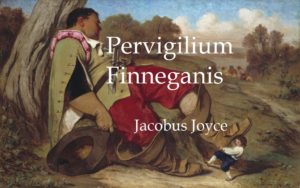