Archbishop Demetrios, chief hierarch of the Greek Orthodox Archdiocese of America, has resigned. He has served the Archdiocese for twenty years and is ninety years old (and has been under pressure from the Patriarch of Constantinople), so his resignation is no surprise.

In recent years the Archdiocese has been embarrassed by the fiasco of New York City’s Saint Nicholas Shrine, a misconceived, fantastically expensive and now stalled building project; and by the impending financial collapse of Hellenic College/Holy Cross Seminary, the Archdiocese’s only theological seminary.

Bishops aren’t (or shouldn’t) be chosen for their skills as businessmen, but for spiritual leadership qualities. Still, if there’s mismanagement, they go down, as we have seen in the Orthodox Church in America, and now in the Greek Archdiocese.

Over the years I’ve seen the Archbishop a number of times, and he’s always impressed me as a godly man who radiates devotion to Christ. We can only pray that his successor will measure up to his spiritual height. 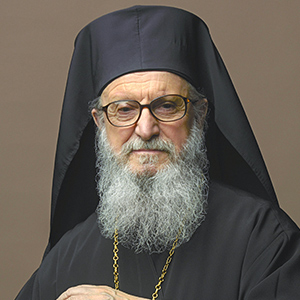